Rev. Marti Keller was the consulting minister for the Auburn UU Fellowship in Alabama in 2018-2019 and is an independent consultant on congregational ministry. She has been both a parish and community minister, serving several congregations in the Mid-South since 1998. She has been a guest speaker in many pulpits, including Dublin, Ireland, Edinburgh, Scotland and San Miguel De Allende, Mexico.

Rev. Keller’s undergraduate degree was in journalism, and she spent more than 20 years in print and cable television as an arts critic, reporter, and columnist. Her education and training in communications and public witness were employed for a dozen years as Director of Public Affairs and Government Relations for Planned Parenthood in California. She served as executive director of two other non-profit advocacy organizations focusing on women and children, and was the first public policy coordinator for the Rural-Urban Network in Georgia.

Rev. Keller is a member of PEN America, an international community of writers, editors, translators, and readers who are working to defend free expression, support persecuted writers, and promote literary culture.

Rev. Keller is a published poet with Thinking in Haiku (CreateSpace, 2017, available from Amazon.com). She is the co-editor, with Leah Hart-Landsberg, of Jewish Voices in Unitarian Universalism (Skinner House, 2014). She is also an author and editor of Faith of UU Jews,part of the welcoming pamphlet library of the Unitarian Universalist Association.

Marti is married to Richard Cohen, who is a health care reporter and editor. They moved from her early native California to Atlanta for work opportunities and family responsibilities, where they have enjoyed the lush tree canopy and the increasingly diverse culture. They live just outside the city, in Decatur, Georgia, which houses the Georgia  Center for the Book ( and year- round literary events) and the largest independent book festival in the country every Labor Day weekend. They have three grown children who live in Australia, the SF Bay Area and New York City, and  four grandchildren.

Rev. Roberta Finkelstein is a life-long Unitarian Universalist. She was raised in the Community Church of New York where she was in the “Cradle Roll” as an infant and remained active through high school. She taught Sunday School with her mom and was inspired by the brave example of her youth minister, Rev. Richard Leonard, when he answered the call to join the civil rights march in Selma. Her early UU experiences taught her that the church could and should be a place of prophetic witness, courage, and transformation.

Ministry is a second career for Rev. Roberta. She was a nurse and certified nurse-midwife. She has a BSN from Binghamton University and her MSN from Georgetown University. Her midwifery practice focused on high-risk pregnant adolescents in Washington, D.C.  During her nursing years Roberta and her husband Barry were active lay leaders in the UU Church of Arlington, VA. Her call to ministry emerged out of those years of professional care-taking and church volunteer work in all aspects of congregational life.

She earned her M.Div. from Wesley Seminary in Washington, DC. She has served in consulting ministries, a new congregation start up, and several settled ministries. She is now a fully Accredited Interim Minister, having served interim congregations in Frederick, MD, Orlando, FL, Ridgewood, NJ, Burlington, VT, and Westport, CT. She just completed a Developmental Ministry in Wilmington, DE.

She is the author of chapters in several books about transitional ministry. She also has an essay in the most recent version of the UU Pocket Guide.
Rev. Roberta has served our UU movement in a variety of ways. She just finished a term as President of the Transition Minister’s Chapter of the UU Minister’s Association. Prior to that she chaired the Nominating Committee of the UU Minister’s Association. She was on the UUA Commission on Appraisal for 6 years and CENTER (Continuing Education Network for Training, Education and Renewal) for 4 years.

Rev. Roberta has been married to her husband Barry since 1974. Barry is a management consultant; he partners with their son Danny in this business. Barry is also one of the partners in Stewardship for Us, the UUA’s preferred provider for stewardship consulting services.

Danny, a product of the Religious Education program in Arlington, VA, is happily married to Jess. They have two daughters, on which grandma Roberta dotes.
Roberta and Barry have two badly behaved cats named Bonnie and Clyde and one relatively well-behaved dog named Brandy.

Jess Hunt (she, they, none) had previous careers in healthcare customer service and communication in a hospital setting, librarian at an academic, public, and school library, and as a birth assistant and doula for a homebirth midwife. She was called into this faith formation ministry several years ago and “dove into the deep end without looking back”. Jess has a Masters in Library and Information Science with a concentration in Youth Services and Leadership and her undergraduate studies were in Theatre with concentrations in art and religion.

Jess is driven and inspired in this work by identifying approaches to overcoming the barriers that divide the human family. She is passionate about developing foundations of soul-nourishing, whole body/whole congregation learning. Jess firmly believes that parents are the first educators and the congregation is the curriculum. This creates the opportunity for the congregation to be the second educators. Jess facilitates this evolution of religious exploration with a fresh perspective and the creation of a brave space to try new techniques. Her mission is to invite connection, inspire spiritual growth, lean into curiosity, and ignite action.

Jess is also passionate about dismantling structures of marginalization and oppression. She has focused on educating others about the culture’s characteristics. Specifically, how to recognize the characteristics in everyday situations and how to begin making the small changes that will create ripples out into the world. She recently facilitated a class with Gail Forsyth-Vail, Interim Faith Development Director with the UUA, on Dismantling White Supremacy Culture in RE at The Mountain for RE Week. It was an amazing experience and cemented her desire for working in continuing education with and for others.

Jess is a single homeschooling parent to four active and goofy kiddos. She enjoys spending as much time as she can outdoors when the humidity is at a tolerable level. This includes kayaking, camping, hiking, and swimming. Jess is a Ravenclaw and a member of the Potterhead Running Club, which means that sometimes she chooses to get up before the sun to run multiple miles at a time. She is in training now for a Ragnar Trail Relay Race in December. She enthusiastically plays kickball with the Varsity Gay League in Orlando. And she is excited to be part of the UUCJ family!

Born and raised in France (French Dad, American Mom), Virginia moved to the United States permanently in 1998, running her own horse-brokerage business through the spring of 2014. She was home-based in New York City for almost 20 years, and work took her back and forth to Europe multiple times each year and also involved extensive travel up and down the Eastern Coast of the United States.

Early “retirement” in late 2014 brought Virginia to Amelia Island, a longtime family haven where she chose to live her childhood dream of outdoor cycling and giving back to the community as best she can. This path took her to UUCJ in 2015, when she started volunteering on an ever-increasing basis at the front desk. Virginia became a Member of UUCJ in April 2017 and applied for the Church Administrator position during the summer of 2018 when her predecessor resigned. The rest, as they say, is “history”… and she considers her role as UUCJ administrator to be her “dream job.” 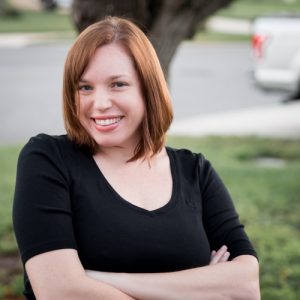 Christina grew up in Daytona Beach, Florida. Although she graduated from Florida State University with a Masters in Philosophy, is more accurately (though more informally) a PhD ABD. She enjoys photography, writing, and web development. She is married to Paul Ramey and has an amazing eight-year-old, Sofia.